On the banks of the Yamuna river, few kilometers from each other, are the towns of Mathura and Vrindavan. Both sacred for the cult of Krishna – whom, according to Hindu epic, was born and spent his childhood here – these two towns attract a lot of pilgrims but few tourists.

Among the two, Mathura is the biggest: a city of 600.000 people, located on the banks of the Yamuna river, with the stone ghats leading the pilgrims and the locals into the river, and the narrow lanes of the old city spreading from there to the East, amidst small shops, temples, ancient ruined buildings, street food stalls, bazars of religious paraphernalia and a congested traffic of scooters and rickshaws. Mathura is also one of the seven sacred cities of Hinduism, and the birthplace of Lord Krishna. Main attraction and core of the city is the amazing Vishram Ghat. Mathura, as well as Vrindavan, is well known in the whole country for the celebrations of Holi, the color festival which marks the beginning of spring. There’s no other city in India that celebrates Holy with the same fervor. 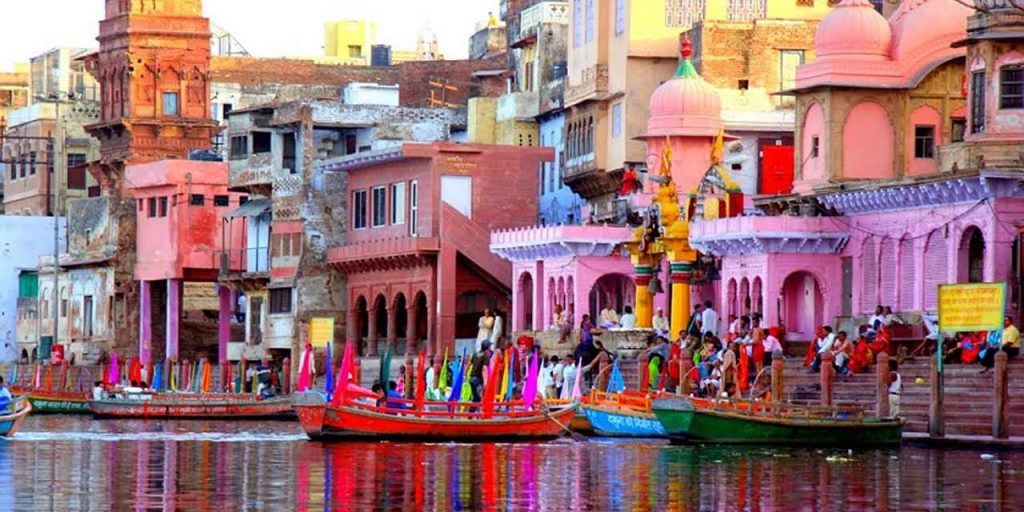 Vrindavan, which counts only 60.000 inhabitants, is situated 11 kms North of Mathura. Also this town is sacred to those who worship Lord Krishna, whom, according to Hindu mythology, here spent his childhood and youth. Despite its size, Vrindavan is home to around 5000 temples and it’s an important destination for Hindu pilgrims. The atmosphere over there is quiet, there are plenty of colourful lanes and hidden spots, and is extremely suggestive at sunrise and sunset by the river. Vrindavan is also famous as a shelter for Indian widows, who, after their husband’s death, are sometimes kicked out of their house by their relatives and end up living in the streets. Many widows, also coming from other States of India, go to Vrindavan (supposedly there are 20.000 widows in Vrindavan, both young and old women), where a few ashrams give them a bed, some food and little money. In return, the widows sing religious hymns for 7-8 hours per day. Every night, after sunset, the aarti – light ceremony- is held at Kesi Ghat.