Protagonist of the well-known Dominique LaPierre’s novel “The City of Joy”, is not hard to understand why Kolkata kept this nickname as her own. Amidst squalor, filth and decay, the people of Kolkata own such an astonishing joie de vivre, which transforms every street, every lane and house of this huge city in a celebration of the five senses. Because Kolkata, above all, is an explosion of colors; the faded colors of colonial buildings, which seem to have spent their last hundred years under water, the flashy colors of hand-painted banners, of yellow Ambassador taxi and idols garlanded with jasmine flowers and red hibyscus at every corner. But also the colors of the morning fog, slowly rising at dawn from the murky waters of the Hoogly, the black smoke of the ferry boats crossing the river, the blue skin of Kali – main Goddess of Kolkata – and the dark green of neem, banyan and plumeria trees that wrap the city in the haunting embrace of the jungle, erupting from the cracks in the concrete floors and buildings facades with the amazing might of nature.The joy of Kolkata is also in its scents; the smell of incense used for puja in the small shrines of the chaiwala shops (tea sellers), scents of humidity, of spices, street food, and the rotten fruits left behind by the closing markets. It’s in the taste of street food, of puffed rice and mango ice cream, papri chaat and samosa, chicken kebabs and lamb rolls, but also in the haute cuisine of the smartest restaurants of the city, biryani and coconut sweets, dosa, rasgulla and fish curry. 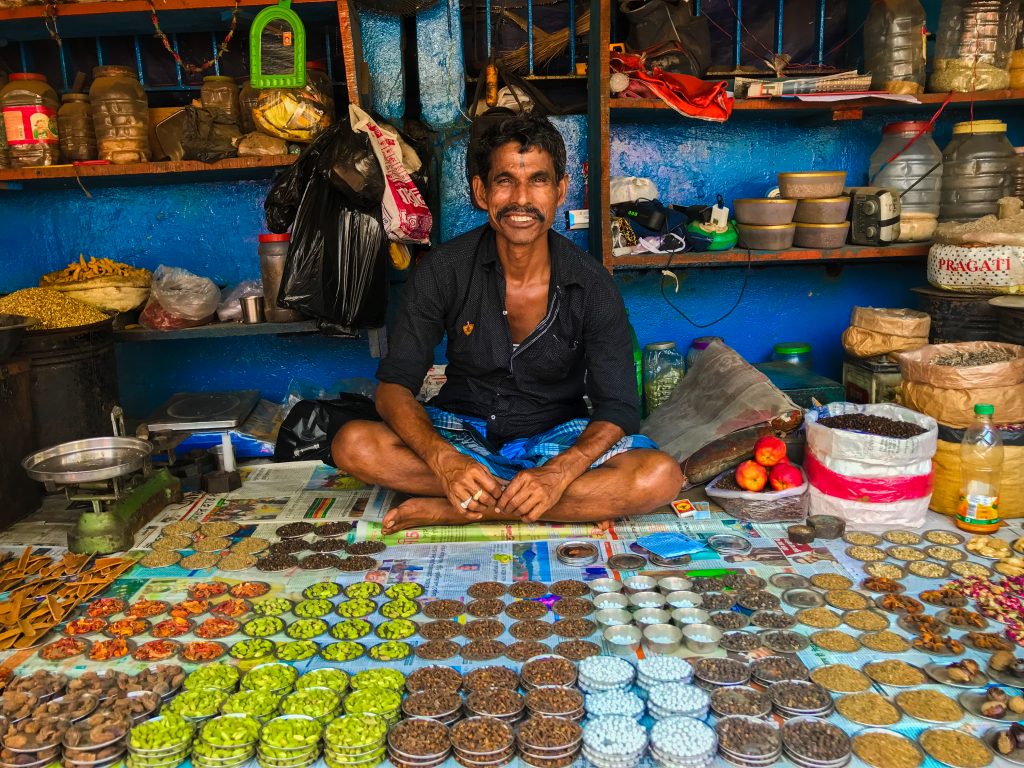 But the real joy of Kolkata is in its people, in their sense of community and the art of conversation, their taste for political and cultural talks with friends and strangers alike in coffee shops, chai stalls, street corners and homes. And there are all those curious but shy looks you get when walking the back alleys of the city, slums and riverside temples; looks which are often followed by an invitation to have a chai and a chat with them in their humble but cozy house, a few pictures together and the promise to come see them again.

Because Kolkata might not be famous for its monuments, but what should be intriguing and fascinating for a traveler – what made us fall in love with this city- is its people, is the atmosphere of harmony you can breath amidst the chaos of its 15 millions inhabitants, and their heartwarming hospitality.

Kolkata is Kali, the bloodthirsty Goddess with four arms, worshipped by the Bengali people as a mother who shields them from the dangers of life; Kolkata is Mother Teresa, whose incredible work, today, keeps on living thanks to the Missionaries of Charity, keeps on living in the shelters that welcome the poorest of the poor, all around the city; Kolkata is Rabindranath Tagore, famous poet and philosopher, Nobel prize winner, writer and thinker; Kolkata is the filmmakers, writers, poets, philosophers and scientists who made this city the cultural capital of India and one of the most interesting cities in the world. Finally, Kolkata is its secrets, those she keeps amidst decadent buildings and crowded lanes: ashrams hidden under railway bridges and Shiva temples surrounded by the shacks of slums, Muslim cemeteries under train tracks, an ancient Tibetan temple in ruins, another Buddhist temple transformed into a Chinese restaurant and a desecrated Zoroastrian temple, the open-air gyms of Indian Kushti wrestlers, the artisans district, an open-air chai pots manufactory and much much more. 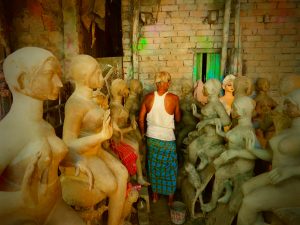 Here below are just some of the places we will be visiting together.

Ghats by the Hooghly river: in India a ghat is a flight of stairs which leads down to a water body (usually a river, but also a lake or an artificial pond). The ghats of Kolkata, by the Hooghly river, are surely among the most intense and alive areas of the whole city. They are used for ritual ablutions but also to do the laundry, to bath, to water animals, to play cricket or just to chat and stay together with family and friends. By these flights of stairs are plenty of crumbling colonial buildings, Hindu temples, bazaars and old monuments crowded with people working, bathing, sleeping, doing yoga, training, walking hand in hand and praying down on their knees in the water. From Prinsep Ghat, in the South, to Nimtala Ghat, in the North, we’ll see hundreds of small Hindu temples and ashrams for wandering ascetics, wooden pier for ferry boats, a flower market, a crematory, the priests and masseurs of Babu Ghat, the wrestlers of Armenian Ghat and all the terracotta idols slowly decomposing by the sidewalk after being immersed in the river for the Durga Puja (the most important festival of Kolkata) 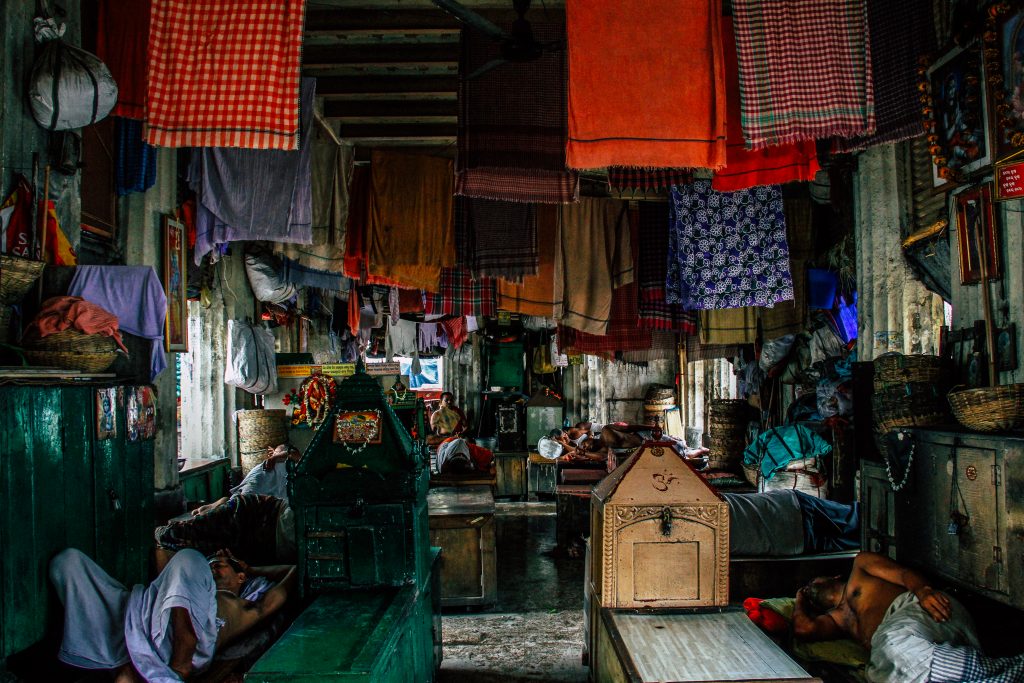 Mullick Ghat Flower Market: is the biggest flower market of Asia. It is located in the shadow of Howrah Bridge, next to the Hooghly river. The freshest blooms come in all colors and sizes, and they are sold by many flower sellers along muddy streets. The Flower Market is one of the most emblematic and chaotic places in Kolkata.

Kalighat: is the most important Kali temple of the city and, probably, of all India. Kali, who might be described as the presiding deity of Kolkata, is worshipped in this ancient Hindu temple with offerings of flowers, coloured powders and coconut milk, but also animal sacrifices that should satiate her thirst for blood. Beside Kalighat, inside a building which used to be a dharamshala (shelter) for pilgrims, there is the Nirmal Hriday: the home for the sick and dying destitutes, which was the very first centre opened by Mother Teresa in the 50’s. To this day the shelter hosts about hundred patients, about ten nuns and many volunteers who come here to serve from all over the world.

Kalabagan and Narkeldanga Slum: One of the reasons why we want to take you to these slums is to show you from the inside these settlements – sometimes illegal or sleazy – where today a great percentage of the urban population of Asia, Africa and Latin America lives, in order to dispel some of the myths and misconceptions about these places. Kalabagan and Narkeldanga slums, in particular, look more like rural villages transplanted in the heart of the city, with colorful and dilapidated houses, small temples and shrines, animals roaming free and, above all, a strong sense of community, a pacific atmosphere of coexistence among smiling and welcoming people who work hard and enjoy life despite poverty and other social issues.

Kumartoli: is the artisans district; a knotty labyrinth of dimly lit lanes and shops, where artists hand-shape and hand-paint big and small terracotta idols and statues of Hindu gods. These beautiful statues are then sold to temples and Bengali families throughout the year but especially around the time of Durga Puja – maybe the most important festival of Kolkata – when thousands of Durga statues are displayed in pandals (temporary structures built just for this occasion) scattered around the city, and, at the end of a week of celebrations, immersed in the Hooghly river.

Jain Temple: a beautiful Jain temple located in North Kolkata. What makes this temple awesome and so unique is the incredible architecture of its facade, the sophisticated mosaic decorations of coloured stones and mirrors, and the golden statues inside of it.Jainism is one of the religions of India – followed by around 4 millions of people – which has several affinities with Hinduism and is especially distinguished by the stress on the principle of non-violence and the extreme forms of renounce and asceticism performed by some of its practitioners.

Chetla Choto Rashbari: entering this complex, where one would expect to find Shiva temples and the likes, there’s a vibrant manufactory of chai pots of clay. A narrow lane, where hundreds of pots are out to dry, leads to the heart of this manufactory, where a dozen men are working, hand-shaping these little pots that will be used by all the chai-wala of the city to serve tea. 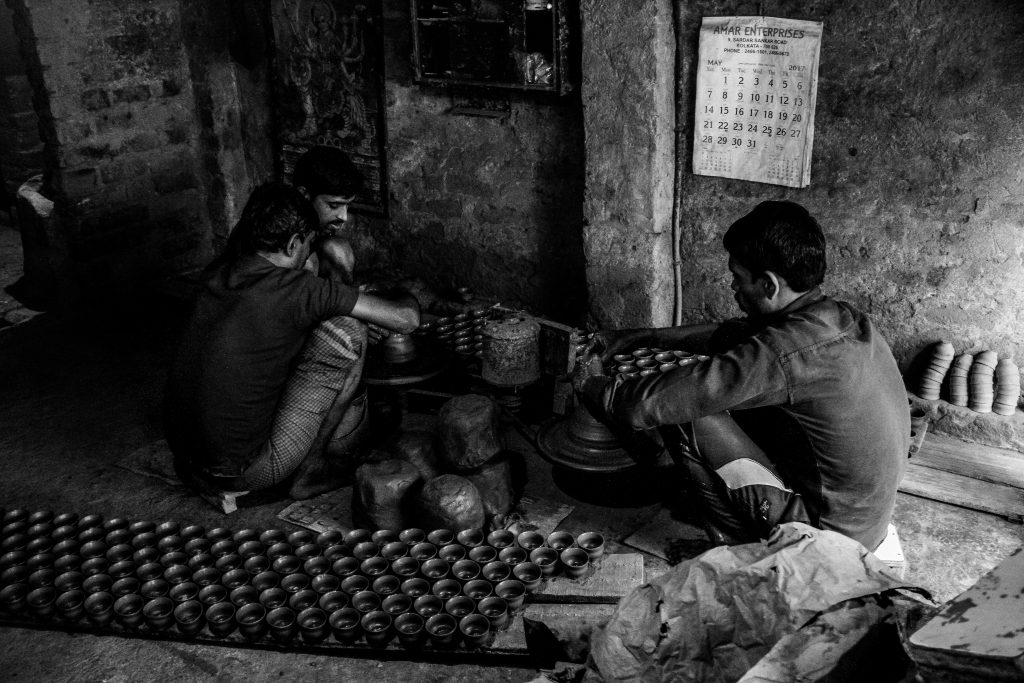 Besides visiting these places, we will take you to the Indian Coffee House – the ancient coffee shop of poets, artists and students, right next to the University – we’ll take a ride on a ferry boat and cross the Hooghly river, we’ll take you out for dinner in the tastiest restaurants of Kolkata, but we’ll also dedicate a whole day to street food, we’ll go shopping in the biggest second-hand book market of Asia, we’ll visite Rajabazar slum and, just for those who would like to, we can arrange a day or two of volunteering at one of the centers of the Missionaries of Charity, who work with women, handicapped children, orphans, dying people and destitutes.