In the heart of Rajasthan, not far from the Thar Desert, are Pushkar and Ajmer, only 11 kilometers away from each other. Two very different towns but both extremely fascinating and colorful; they are two of our favourite places in India.

Ajmer is the bigger one, but still a small city (for Indian standard). It’s usually ignored by foreigners, but is a very important pilgrimage destination for Indian Sufi and, moreover, is a city rich with history and charm. Here is the dargah (shrine) of Moinuddin Chisti; probably the most important and celebrated Sufi saint of all India (from the 13th century), worshipped by Muslims and Non-Muslims alike. His tomb is located inside a beautiful complex of marble monuments, with a massive gate of carved stone and silver doors, always crowded with pilgrims, nomadic ascetics (fakir) and Sufi masters (pir), but much quieter in the evening, when people sit on the marble courtyard outside the tomb and listen to the live Qawwali music played by a troupe of musicians. This dargah is surrounded by the narrow lanes of a bazaar, in a neighborhood of old, run-down and colorful houses, Moghul and Persian cuisine restaurants, other Sufi shrines, mosques, temples and courtyards where children play cricket and fly kites. The city becomes really crowded and lively during the Ajmer Urs; the annual festival which commemorates the death of Moinuddin Chisti, when tens of thousands of people parade the streets with huge flags, while in the courtyard of the dargah there’s live music every night. Thousands of fakirs (muslim ascetics) come from all over India, dressed with ragged clothes and green turbans, wearing bone and wood rosaries, carrying whips and iron swords; they gather and dance, sing and pray all together, jubilant and intoxicated.

Other places of tourist interest are Taragarh Fort and the Golden City inside Nasyan Jain Temple. 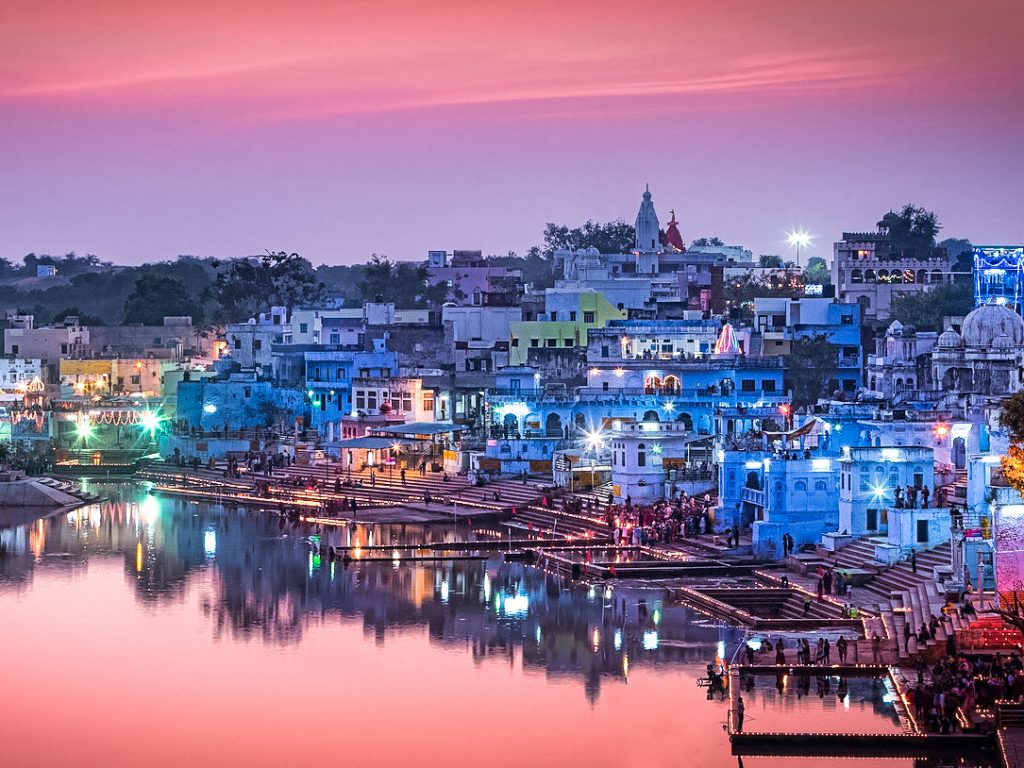 Pushkar is a very small city – almost a village – of a few thousand people, built around an ancient lake, very sacred for Hindus, surrounded by 52 ghats of stone, temples, palaces and white washed houses. Pushkar is an extremely quaint place, where we will take a break from the chaos of other cities, a place where the only traffic is that of holy cows, monkeys, camels, Hindu ascetics, tourists and pilgrims. The city also hosts the only Brahma temple of India, and for that reason is a pilgrimage destination for the Brahmin caste. Every year, in October/November, the well known Camel Fair takes place. It’s a fair for the sale of livestock – camels, goats, horses and sheeps – as well as a cultural and folklore event, where camel races, dances, exhibitions and competitions of the strangest kind take place. During the full moon nights, thousands of visitors from all over India dive in the sacred lake of Pushkar and visit the Brahma temple.